Israel Tennis & Education Centers (ITEC) > News and Media > In The Media > Jewish News Syndicate: In Israel, what a difference two (or rather, 18) months make …

(August 13, 2021 / JNS) Walk down Dizengoff Street in Tel Aviv or through Jerusalem’s famed Machane Yehuda open-air market at 10 p.m. on a random weekday night, and it’s hard to get a table. Diners are eating schnitzel, drinking beer and discussing surfing, a scheduled (or postponed) trip abroad and the big sale at Ikea (Israel has seven stores), which ended on July 27. During an ordinary summer, tourists from all over the world would freely mix with Israelis at these restaurants.

But this is no ordinary summer. With the exception of a few thousand tourists granted special permission to visit as part of teen tours—Birthright trips, rabbinic groups, Jewish communal leadership and/or missions, or as first-degree relatives visiting Israeli children or parents—very few non-Israelis are enjoying the Jewish state this summer.

Traveling to Israel has gotten tougher as countries around the world are now being classified by color—yellow, orange and red. The United States became orange on Aug. 11, meaning those fortunate enough to be granted permission to travel to Israel must quarantine upon arrival for seven to 14 days. An active Facebook group, “Reunite Olim With Their Families,” now has more than 10,000 members. Throughout the pandemic, their goal has been to “provide support, help and resources for olim and their families” so as to be reunited in Israel after being separated so long due to coronavirus travel restrictions. The group serves as a place to share resources to help others get approval to be reunited with their families. With few exceptions, only potential travelers with immediate relatives have a shot at visiting Israel right now. 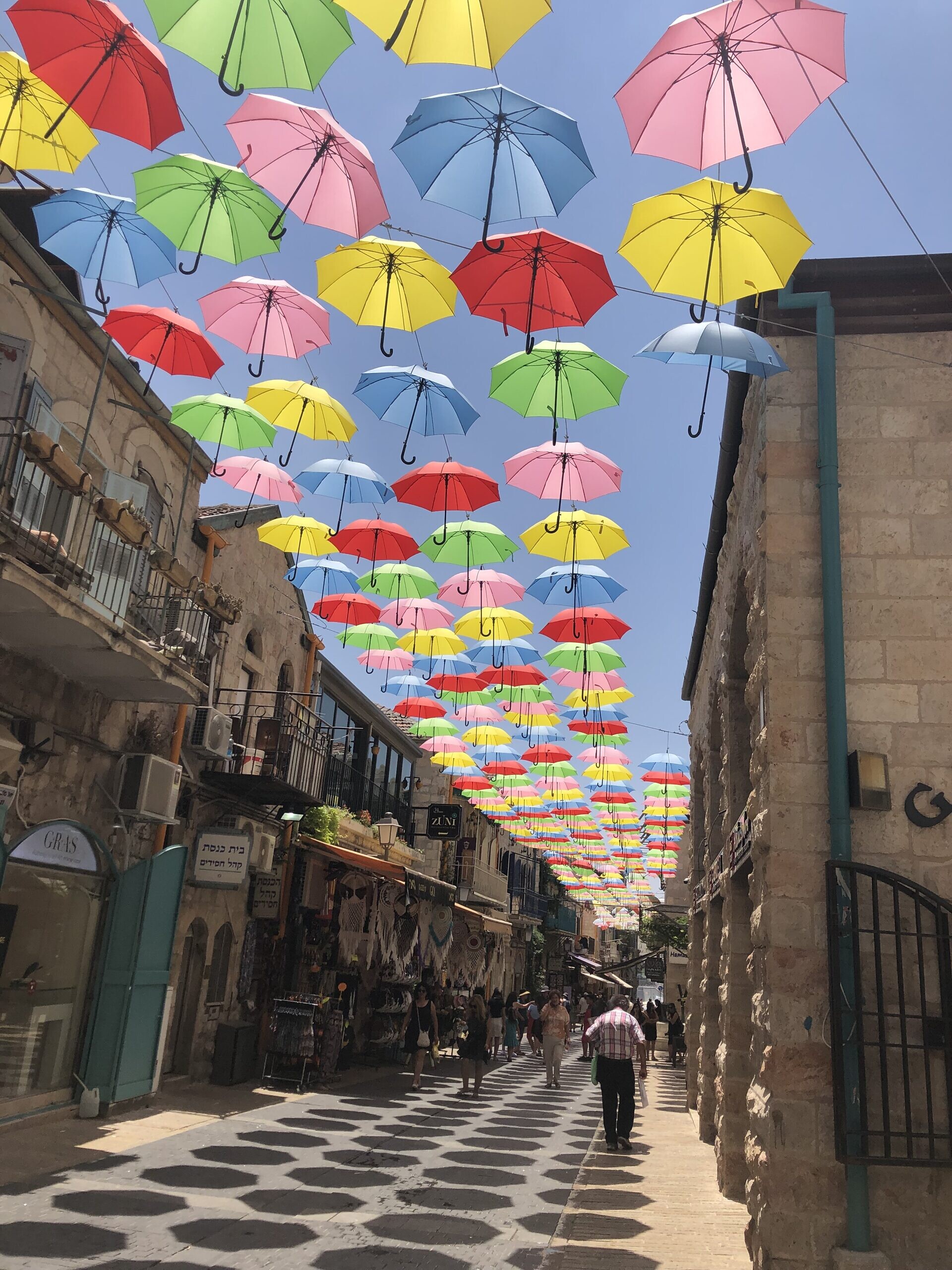 Prior to last March, for most tourists around the world, all that was required to enter Israel was a passport and a plane ticket. Now, Jews simply wanting to put a note in the Western Wall, visit Yad Vashem, eat falafel on Ben-Yehuda Street, hike Masada or celebrate a child’s bar or bat mitzvah don’t have the opportunity. Some out-of-work tour guides have been offering virtual tours of Israel hot spots, but it’s not the same.

I am pleased to be one of the lucky ones, having been granted permission to visit first-degree relatives. With my serological test and Tav Yarok (“green pass”) in hand, I have been able to visit relatives, eat shwarma, drive up and down Kvish Shesh (Highway 6), enjoy Netanya’s beaches (and kosher French pastries), observe massive country-wide construction—and just take it all in. I have visited Israel twice since May, and offer a few observations and insights.

Israeli Jews and Arabs go about their business

For those who haven’t been fortunate enough to visit Israel in two or more years, the country looks the same, and yet different.

When I landed in Israel a few months ago, in May, and began walking down Arlozoroff Street in Tel Aviv (trying to avoid the backhoes and tractors working on the massive light-rail project), I was keenly aware of people’s faces. That would sound odd, of course, during any time but these COVID times. I was seeing hundreds of faces for the first time in more than a year. Not just eyes, but entire faces—people eating and drinking in packed cafes and bars, people swimming, surfing and playing volleyball and old-fashioned matkot (often called “Kadima”) on the beach.

People remained unmasked throughout the two-week visit, but the sense of calm and complacency changed within seconds one evening. While returning to our Tel Aviv Airbnb from dinner, the sirens came out of nowhere, and we followed the lead of fellow Tel Avivians running for cover in shelters or basements, hallways, even under concrete steps. A week of unexpected bombing was underway from terror groups in Gaza. We, and all of Israel, would be in and out of shelters and safe rooms for an entire week. Flights out of Ben-Gurion were canceled, and the chances of returning home in time for a life-cycle or any other event looked bleak. 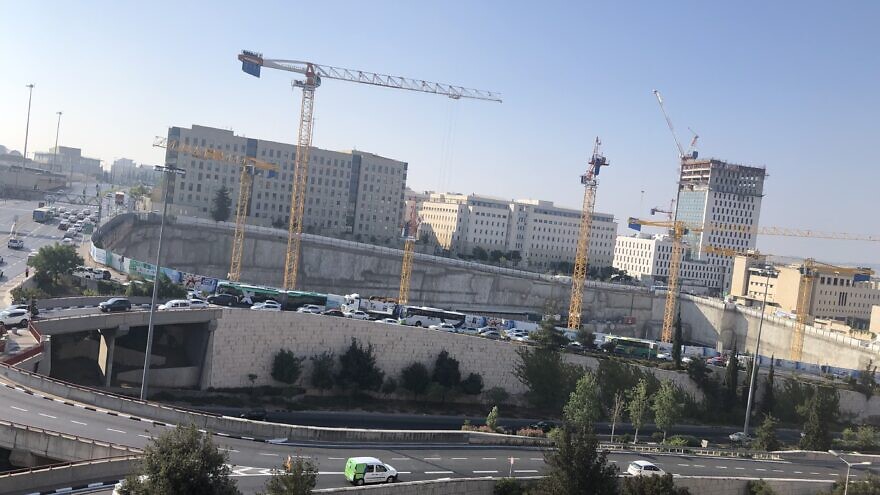 Construction can be seen throughout Israel. As they say, the crane is the national bird of the Jewish state. Photo by Howard Blas.

While residents of Ramat Gan outside Tel Aviv all the way down to Beersheva were dealing with hundreds of falling rockets—and with their phones, people were filming Israel’s Iron Dome air-defense system knocking most out of then out of the sky—other areas were dealing with riots, fires, looting rock-throwing and stabbings in traditionally calm, mixed Arab-Jewish neighborhoods.

By July, everything had shifted again. A feeling of physical safety—from the Gaza Strip and the Arab sector—had mostly returned. But then, the Delta variant of COVID-16 started getting out of hand, and Israel returned to mask requirements indoors with workers in the private sector encouraged to continue working from home. Government officials were working 50 percent in person and 50 percent remotely. Each of the three Shabbats I spent in shul (in Beersheva and Tel Aviv), mask compliance neared 100 percent after a spring where vaccinations meant faces were visible. What a difference two months makes!

While the news around the world has had a field day reporting on the Ben & Jerry’s boycott announcement of not selling their products to West Bank communities and parts of Jerusalem, and while The New York Times ran a long piece titled, “Riots Shatter Veneer of Coexistence in Israel’s Mixed Towns,” these are far from the big stories in Israel. Ice-cream lovers can still buy Ben & Jerrys in supermarkets and in small stores (though many now don’t want to). And Israeli Jews and Arabs go about their business—together. 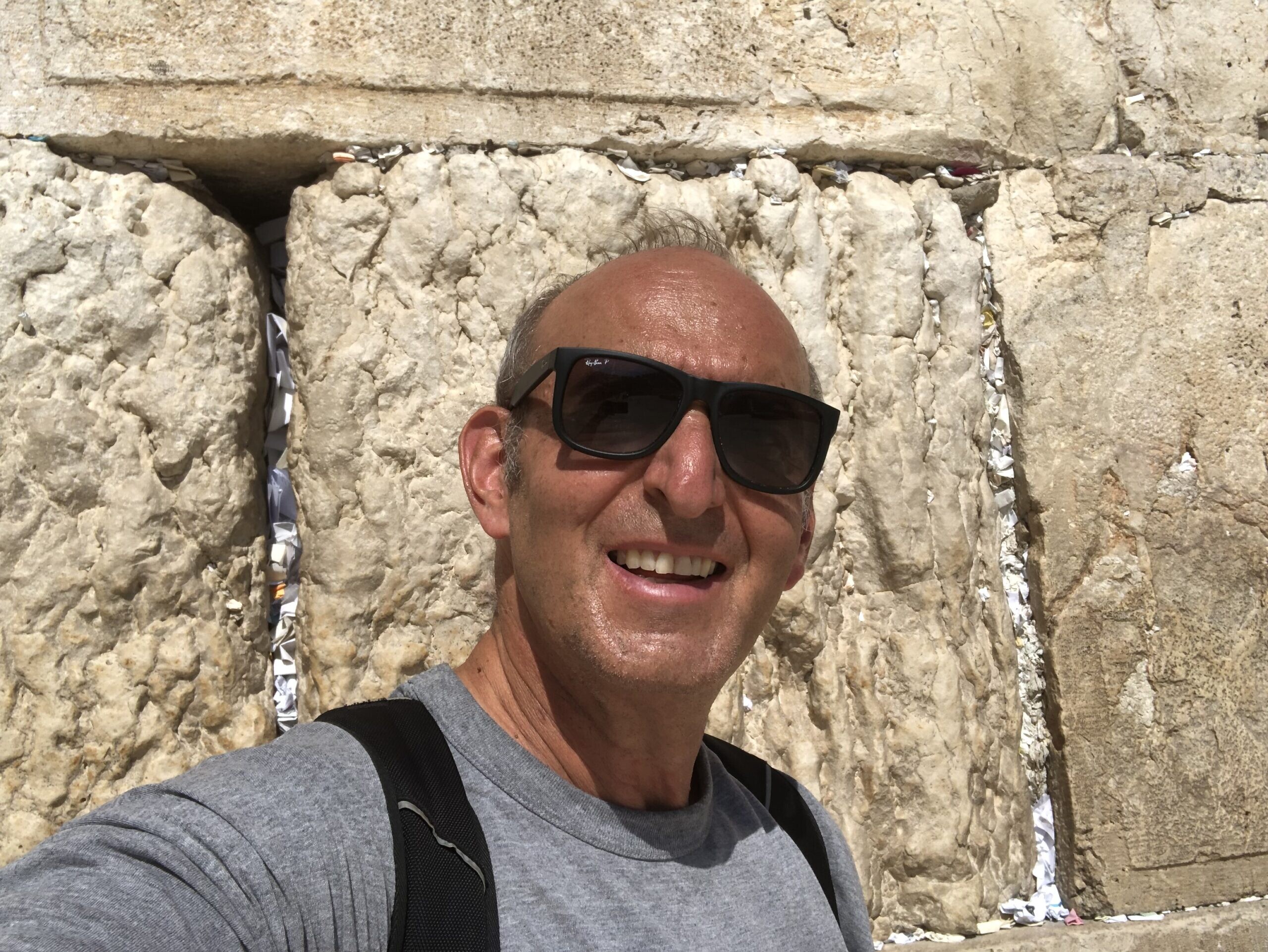 The author at the Western Wall in Jerusalem. Selfie photo by Howard Blas.

In the ever-expanding city of Beersheva in Israel’s Negev Desert, Jewish, Muslim and Bedouin families wait in lines together at Osher Od or Machsanei Hashuk grocery stores with their overstuffed shopping carts in the checkout line. All have the same goal—to feed large families at the best possible prices. At Soroka Hospital’s many medical specialty clinics, Jewish and Muslim mothers wait for appointments—with Jewish and Arab doctors—and offer each other personal stories, comfort and support.

At the many Israel Tennis Educational Centers in such “mixed” cities as Jerusalem, Jaffa, Beersheva, Tiberias, Haifa, Sajur, Yokneam and Akko, the co-existence program has been bringing Jews, Muslim Arabs, Christian Arabs, Bedouins and Druze and refugees from many countries around the world together since 1970 to learn and play tennis.

In Israel, life goes on. Coexistence is not a news story.

Drive south down Kvish 6, Israel’s fast north-to-south toll road, and you will see an example of daily life that is not a news story. You will pass the town of Kiryat Gat in the distance, and it is simply exploding. It’s not just home to Intel anymore. Companies such as Hitachi, Zenith Solar and HP-Indigo have a large presence, and construction of upscale apartments and private homes in nearby Carmei Gat are going up everywhere.

After exploring the industrial area and walking the streets of Kiryat Gat, a city that’s home to about 57,000, I set out to tour the Negev Brewery, Noam’s Artichokes and Maresha Estate Winery. To my disappointment, all were closed but a friendly voice on the phone at the winery directed me to Beta Israel Village. To my delight, I discovered a replica Ethiopian village with guides and workshops working hard to preserve and share Ethiopian Jewish life with Israelis and tourists alike. Nearly 4,500 Ethiopian Jews live in Kiryat Gat.

What a pleasure to discover Israel’s gems, large and small. The joke is that Israel’s national bird is the crane. Construction cranes are everywhere—from Jerusalem to Netanya to Beersheva. Names of fancy buildings with apartments in the millions include the Mesila (Jerusalem’s German Colony), T-Towers (Ir Yamin-Netanya) and David Promenade Residences (Tel Aviv). Is Israel, currently a country of fewer than 9 million people, gearing up for the potential immigration for all of the world’s estimated 14 million Jews? No! Israel is gearing up for extraordinary internal growth.

According to projections by the Taub Center for Social Policy Studies in Israel, the country’s population will reach about 12.8 million in 2040. The Central Bureau of Statistics, projects that by 2050, Israel’s population will hit 15.7 million. 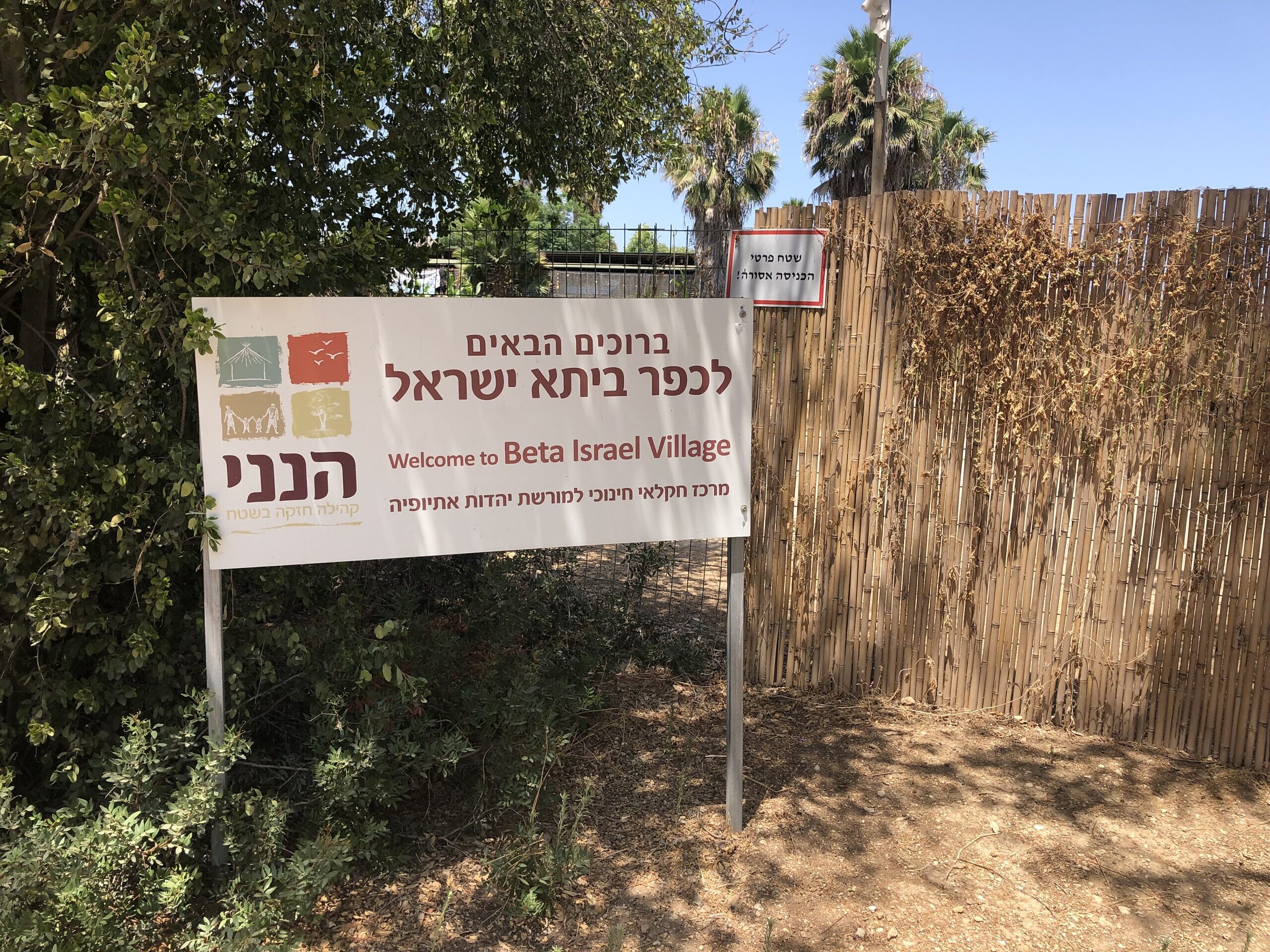 As an example, the entire city of Jerusalem is currently undergoing a massive facelift with every infrastructure project from light rail to roads being addressed at once. The high-speed train from Ben-Gurion International Airport and Tel Aviv’s Haganah station to Jerusalem—a huge time-saver over commuting in terrible traffic—is up and running. A new three-mile road, Road 16, an entry route to Jerusalem, is currently under construction and will connect Route 1 from the Motza area to Givat Mordechai through two tunnels. It will be under the Har Nof and Yefeh Nof neighborhoods.

Renderings of high-rises scheduled to be built at the entrance to Jerusalem will have travelers thinking they are in Midtown Manhattan!

Yet for all of Israel’s growth, in many ways, it’s still the same old Israel. Israelis still earn their name as sabras—prickly on the outside and sweet on the inside. Impatient customers shout at fellow customers and cashiers in checkout lines. Wolt delivery drivers and commuters on scooters, bikes and motorcycles unapologetically come within centimeters of toppling pedestrians. And parking everywhere is a nightmare, especially when every inch of street or sidewalk is deemed to be a legitimate parking space.

And Israel continues to help one another in large and small ways. Benches in cities are filled with clothes and kitchen items for others to take. Produce and meals are offered free to the poor nationwide.

Israel is still teaching the world to save water through drip irrigation and through toilets with two flushers. Israel is teaching the world safe ways to walk on sidewalks while using cell phones—in Tel Aviv, a thin red or green line serves as a walk/don’t walk signal for those waiting for the light to change. And Israel’s food—cuisine that runs the gamut of the world—can’t be beaten. It’s still the Startup Nation, even though the hundreds of startups that don’t get bought out by Google still boast impressive concepts.

It’s just one of the ways the country’s ingenuity and subtle differences make it like no other place in the world, especially for Jews, native or visiting. The entire country—from the most to the least traditional—stops and acknowledges Shabbat in some way. Almost everyone shares Friday-night dinner with family or friends, and cherishes Saturdays for activities at a calmer pace, from traditional synagogue prayer to wind-surfing on the Kinneret.

We pray that the Jewish homeland will soon be ready to welcome the extended Jewish family for a visit.